Although Memorial Day is often a 4-day weekend, our weekend was cut short so that Andy could return to base for a special flag detail on Monday morning (that, in true Army fashion, got canceled at 0600 the morning of.) So, squeezing in one last activity on Sunday morning as we headed home, we stopped by Ettal Abbey. 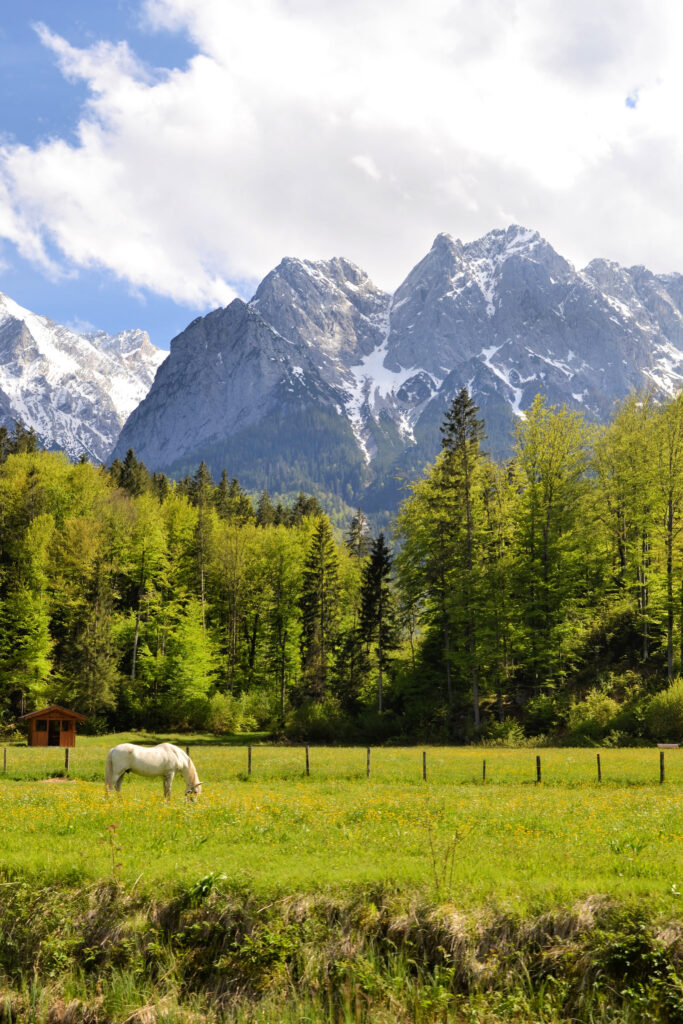 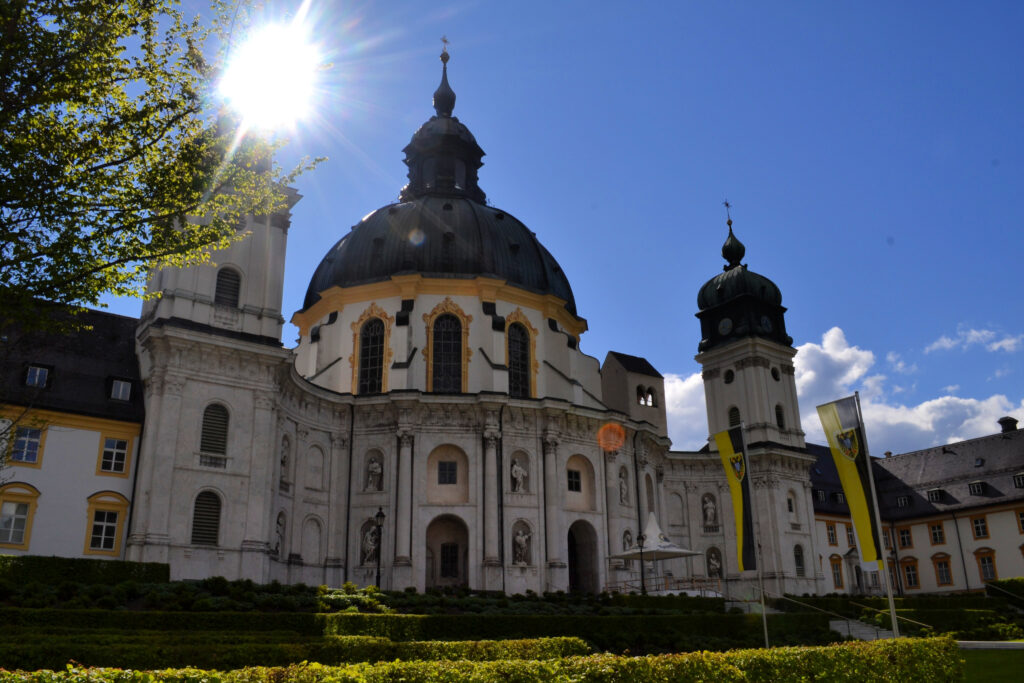 Ettal Abbey is a Benedictine monastery founded in 1330 with an on-site cheese-making factory, distillery, and a few other shops. 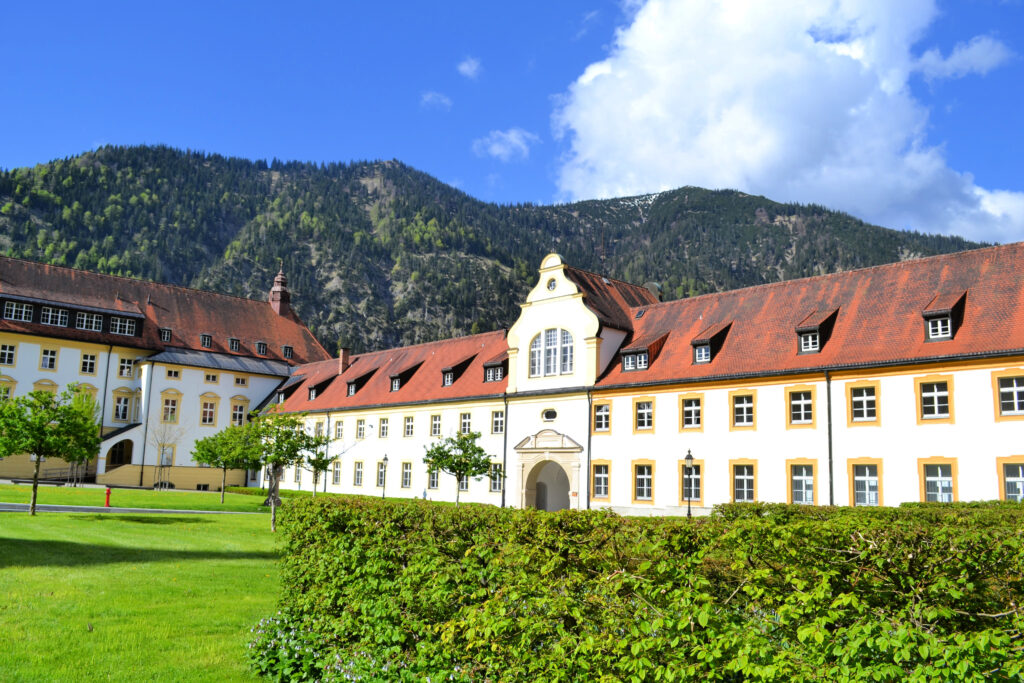 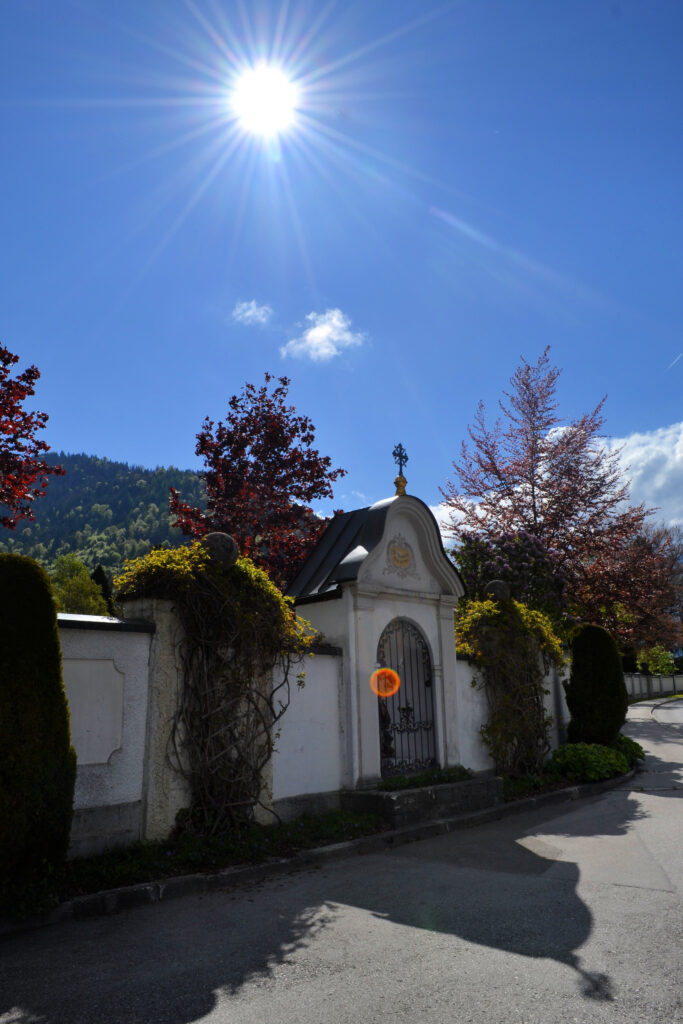 Sadly, the monastery’s shops and distillery were closed, as they were having Sunday services when we explored the grounds.

Poor Drew was startled when the church bells began chiming to alert everyone that the service was about to begin! We would have liked to attend, but we didn’t as we were not appropriately dressed… and our toddler has not quite mastered sitting quietly during an entire church service 😉 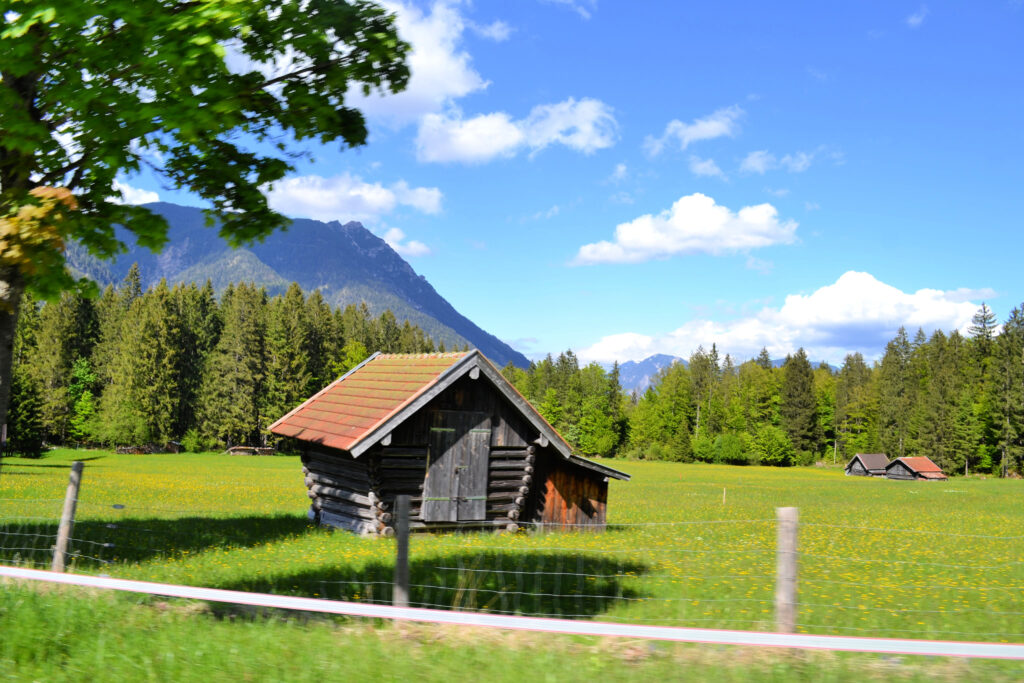 Instead, we wandered around the garden and past the pastures. 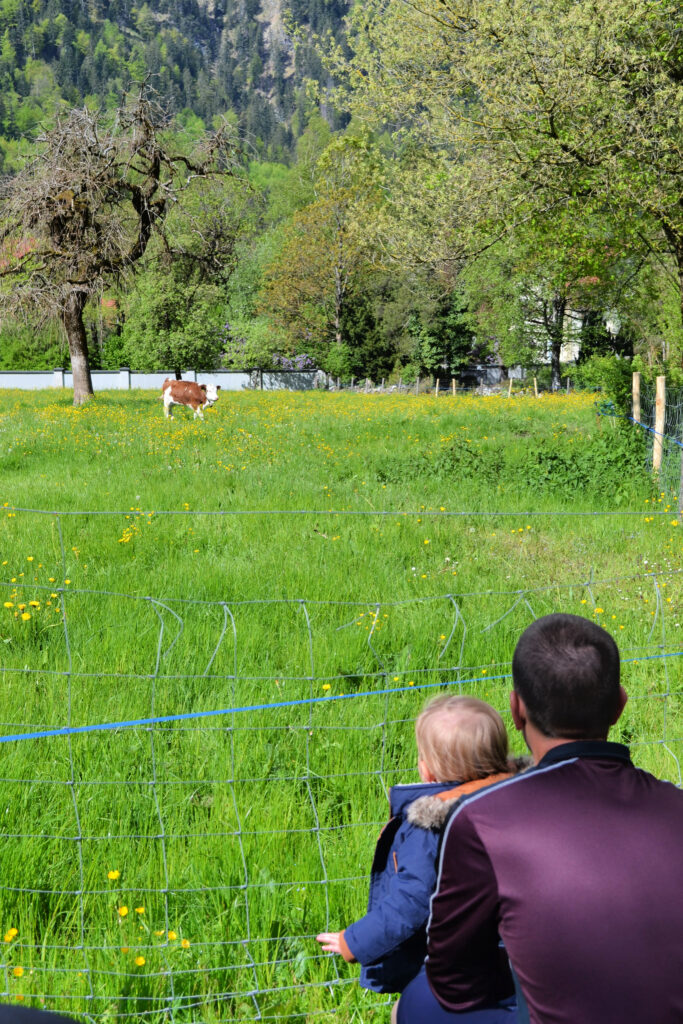 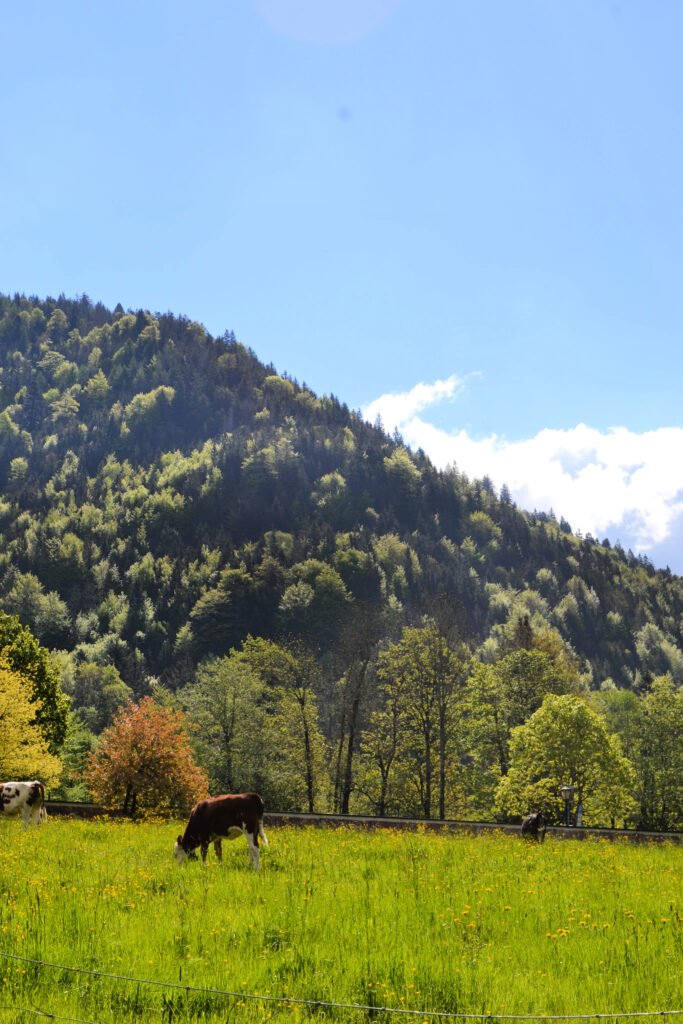 Drew loved seeing the cattle and kept squealing in excitement – perhaps he will grow up to be a rancher like his Daddy was in pre-Army life, who knows. 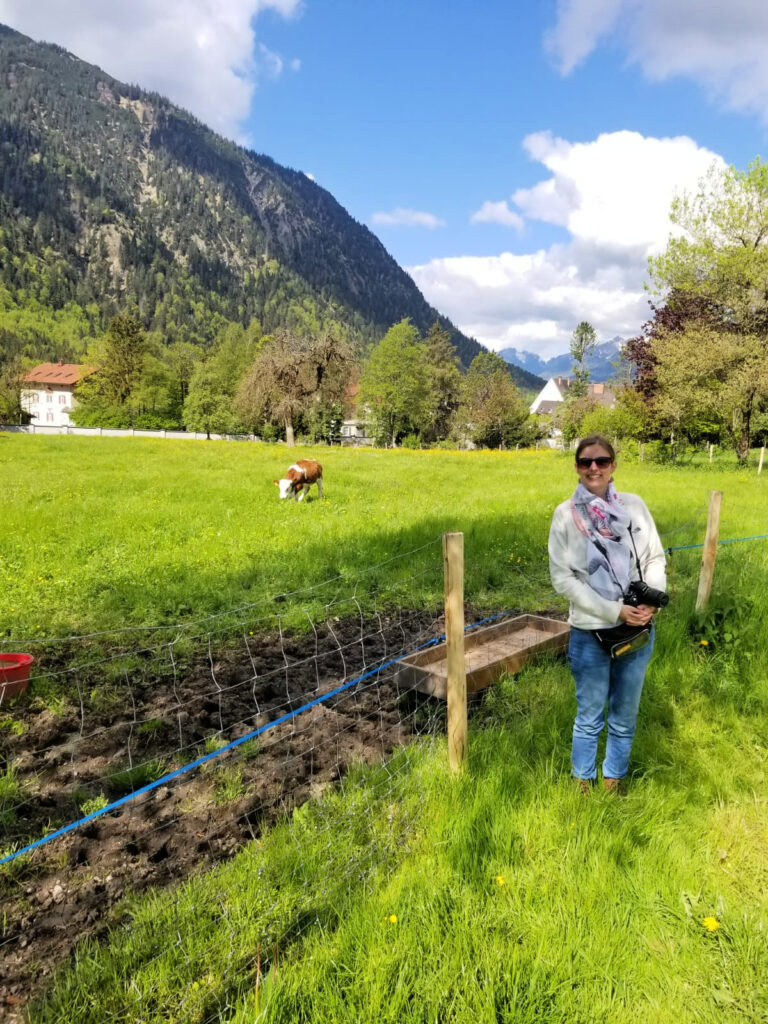 I, too, was incredibly excited to see the cattle. They had bells on their necks, just like you see in tourist magazines about the Alps. When we saw the first head of cattle as we drove down to Garmisch on Friday night, I had this moment of “Can you believe we really live here?!” 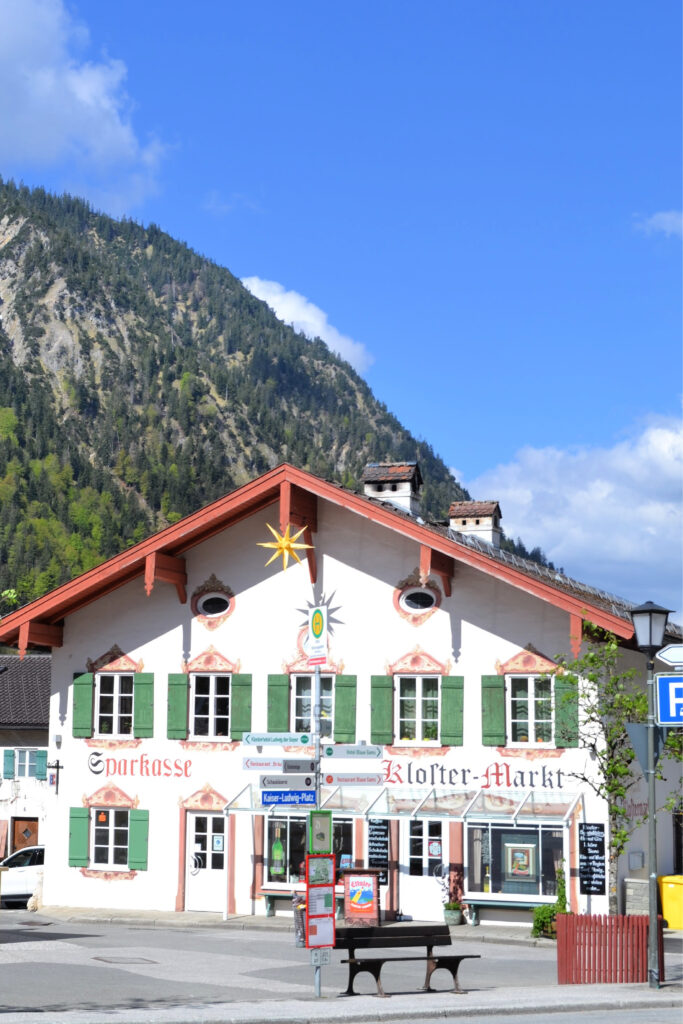 But before I close this post, I want to share a few final thoughts about Garmisch: It was a hard trip for us despite the beautiful pictures. Very hard. It was our first vacation since moving to Germany and, of course, having Drew. But, honestly, neither of us was disappointed when we had to leave a day early, other than still having to pay for a night in a hotel that we didn’t stay in.

I had a difficult time not being able to “go, go, go” as I would normally do when traveling. I know you’re probably thinking, “Duh, Bailey, that’s what happens when you have a child,” but logically knowing that and really experiencing it are two different things.

Nonetheless, I am so grateful to live here in Germany and experiencing what I can. Seeing some of Germany (and of Europe) is better than seeing none of it. 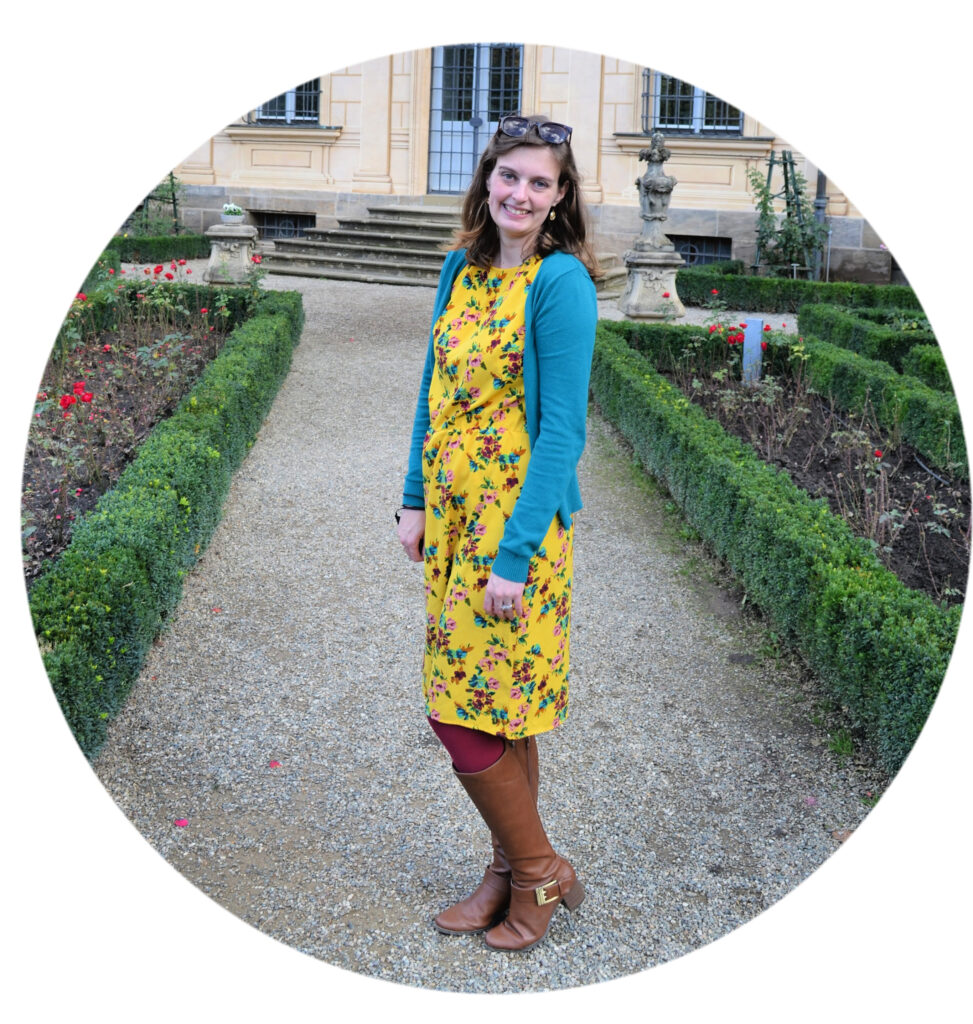 I’m a Kentucky girl who fell in love with a soldier and packed up her life in the Bluegrass state to explore the world. I currently live in beautiful Bavaria, Germany with my handsome husband, our toddler son, and our cat. Becoming Bailey is my happy space on the web where I share about our lives, travel adventures, and everything in between!

This website uses cookies to give you the most relevant experience by remembering your preferences and repeat visits. By clicking “accept,” you consent to the use of all the cookies.
Do not sell my personal information.
Cookie SettingsAccept
Manage consent

This website uses cookies to improve your experience while you navigate through the website. Out of these, the cookies that are categorized as necessary are stored on your browser as they are essential for the working of basic functionalities of the website. We also use third-party cookies that help us analyze and understand how you use this website. These cookies will be stored in your browser only with your consent. You also have the option to opt-out of these cookies. But opting out of some of these cookies may affect your browsing experience.
Necessary Always Enabled

Performance cookies are used to understand and analyze the key performance indexes of the website which helps in delivering a better user experience for the visitors.

Analytical cookies are used to understand how visitors interact with the website. These cookies help provide information on metrics the number of visitors, bounce rate, traffic source, etc.

Advertisement cookies are used to provide visitors with relevant ads and marketing campaigns. These cookies track visitors across websites and collect information to provide customized ads.

Other uncategorized cookies are those that are being analyzed and have not been classified into a category as yet.